How many times have you realized that you forgot you needed a card for a Birthday, Thank you, Sympathy….

Well, for those of you who don’t use stamps to create cards how about digital?  This morning when I awoke I was going to run up to Target to get a couple of Sympathy cards. Then I realized that I probably could make them on my own using some of the digital art I had on my laptop.  The cards you see here I 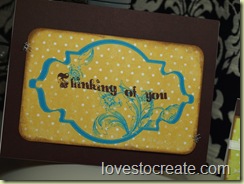 created this morning in under an hour, could have been shorter but I was goofing off as I worked, he he.  I used some digital files I purchased at House of 3 recently to print the patterned paper and the images are also from Ho3 as well.  I simply clicked a few buttons to arrange them and then hit print.   I did do a li 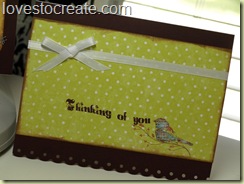 ttle distressing to them and added some other cardstock.  But, you could actually omit all that and still make a great card! Had I taken more time I probably could have made them cuter but I think they are fine as is.  Hope you have a great weekend!

love em! I love digital scrap booking, easier for me then the conventional kind.

Nancy! Ah, old SanAntone, glad ya'll had a little getaway. How is Shamu? Hope it wasn't fried-eggs hot there yet when you went. It's getting on up there this month, isn't it? Love your cards and you are gettin jiggy with the digi. Just came by to say hi!

What a great idea! Love them. You are so creative